The current Russian offensive may bring moderate territorial gains to the Donbass, northeast of the E40 motorway, but it may peak before capturing important population areas such as Sloviansk or Bahmut, the Institute for the Study of War (ISW) said in a statement. Thursday morning assessment.

Russian forces have made no significant progress toward the Sloviansk or Sivarsk-Bahmut key areas in recent weeks, and continue to degrade their own offensive fighting power in localized fighting for small and relatively insignificant settlements across the Donetsk region.

Russian troops were caught up in battles for small settlements

Moscow’s troops mainly attempted to capture Chiversk after capturing Lysizansk on July 3 and occupying Lugansk, but did not yet reach the city until July 20.

Also, Russian troops failed to launch direct attacks on Bahmuth, and were largely engaged in fighting for small settlements to its east and south.

Efforts to advance towards Sloviansk were largely halted and no significant gains were made for weeks.

The resumption of intensive ground offensives after a brief operational hiatus did not translate into significant progress, although sustained pressure from Russia or the completion of Russia’s efforts to restore combat power could lead to limited improvements in the coming days. weeks.

The land where the Russians go is favorable for the Ukrainians

Approaching the E40 around Sloviansk and Bahmut, the Ukrainian defenders will face more favorable terrain, due to the high population density and high construction density in these areas.

See also  The only Western leader who has met with Putin since the beginning of the invasion: The Russian president has "his own logic about war."

Therefore, the current Russian offensive in the Donbass will culminate somewhere along the E40 in the coming weeks.

Lavrov’s statements are far from the reality of the war

Russian Foreign Minister Sergei Lavrov laid out the geographic targets on Wednesday The extension to Russian operations in Ukraine confirms ISW’s earlier assessment that Russia has territorial ambitions beyond the Donetsk and Luhansk regions.

Lavrov said the geography of the “special operation” had changed since March and now included not only the Luhansk and Donetsk People’s Republics, but also the Kherson and Zaporizhia regions and several unspecified territories.

Lavrov’s calls for such large-scale regional goals are clearly far removed from the reality of Russia’s recent, slow and torturous progress in Ukraine.

Pressure from the Ukrainian counteroffensive is complicating Russia’s efforts to strengthen military control over the occupied Kherson and Zaporozhye regions, and it remains unclear how the Kremlin will generate the offensive power necessary to seize significant new swathes of Ukrainian territory.

Key outcomes of the ISW assessment:

Map of the war in Ukraine on July 20: 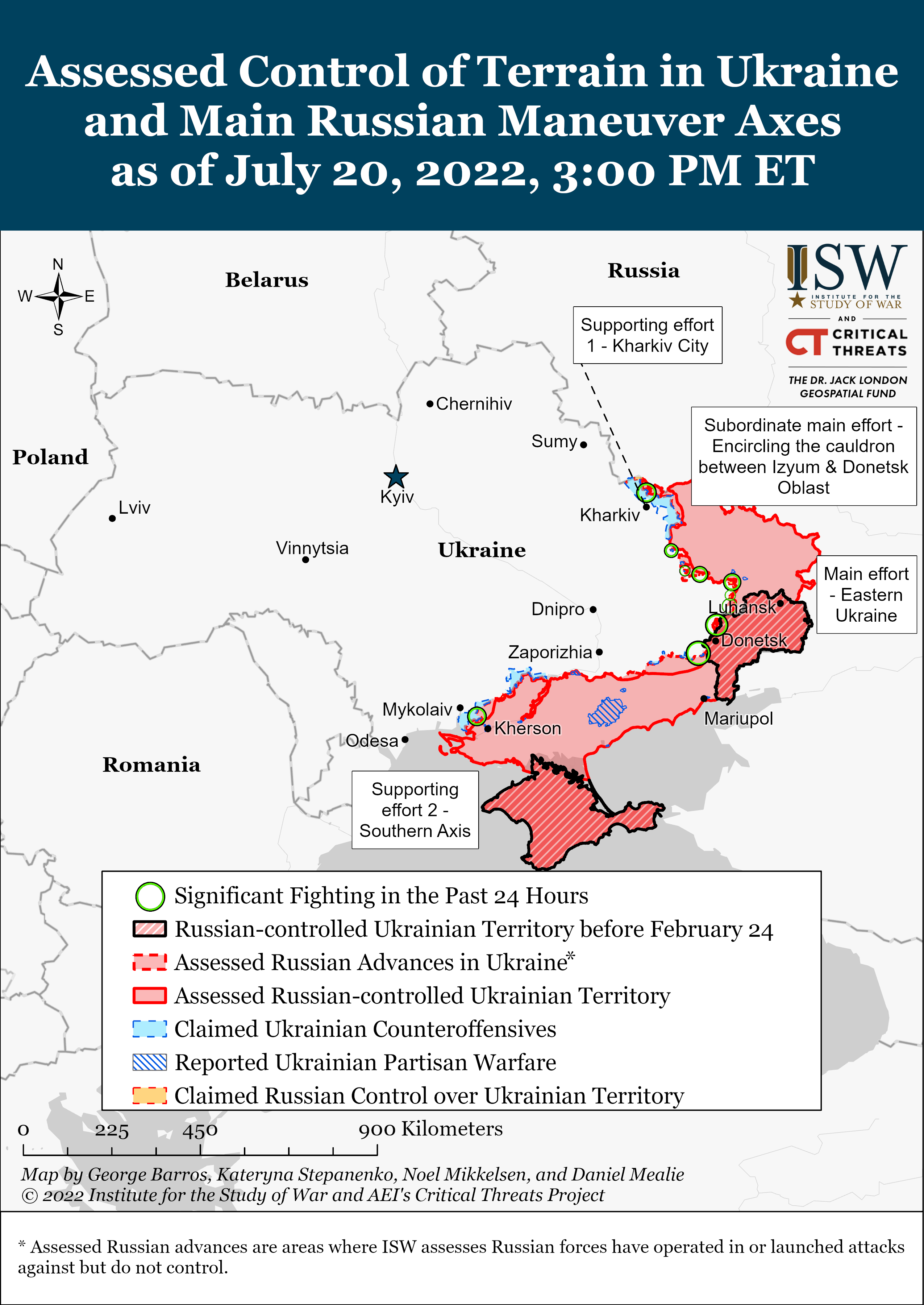