By Tony Rice, Ambassador of NASA

The newest addition to the Internet satellite constellation Starlink will be visible tonight about an hour after sunset.

Starting at 8:56 p.m., look at the northwest horizon for a line of small lights, 53 in all, rising upward. Thet will pass overhead a little before 9 p.m. before disappearing into Earth’s shadow over the southeast horizon by 9:03 p.m.

Some describe the string of lights as resembling a train, or even ducklings following a mother duck.

The satellites are over Illinois when they come into view and then follow a line that takes them over Charlotte, then Myrtle Beach.

Launched from Space Launch Complex 40 (SLC-40) at Cape Canaveral Space Force Station in Florida on Thursday, April 21 at 1:51 p.m., this is the latest set of office desk-sized satellites designed to provide global Internet service. There are generally 6-8 Starlink satellites in our sky at any given time. In the days after launch, it can be seen because even though it’s dark here on Earth, sunlight still reaches it as it orbits 200 miles above Earth.

After launch, each satellite is moved to its final orbit by raising its altitude and spreading the satellite flock.

The same 53 satellites will be visible Monday evening starting at 9:13 p.m. rising from the west. But this corridor will be more than 5 times darker, and spaced out wider which makes it more difficult to see. By Tuesday, this group of Starlinks will be out of sight. 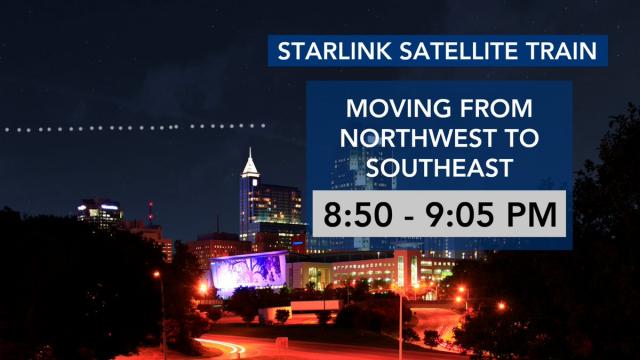 See also  What do your favorite James Webb photos say about you?