The first safe corridor designed to allow civilians to flee war-torn Ukraine opened Tuesday, in a major move that was met with skepticism after similar efforts failed as the number of people fleeing the country topped two million.

Mass exodus continues as President Joe Biden announced a ban on US imports of Russian energy, saying the US was “targeting the main artery of the Russian economy”.

Ukraine’s communications agency posted on Twitter on Tuesday a video of buses leaving Sumy, a city of 260,000 people in northeastern Ukraine near the Russian border.

“The first phase of evacuating civilians from Sumy has just begun,” Ukraine’s communications agency wrote on Twitter on Tuesday. “The Russian Defense Ministry officially approved the humanitarian corridor in a letter to the Red Cross,” she added.

Russia’s ambassador to the United Nations, Vassily Nebenzia, said those fleeing Sumy and other cities would have the option of going to Russia or to western Ukrainian cities that were not targeted.

But Ukraine’s Deputy Prime Minister Irina Vereshuk warned that the Russians were preparing to “disrupt humanitarian corridors and manipulate the route” to force people to go to Russia. The Ukrainian military claimed that Russia launched an offensive in the direction of the humanitarian corridor outside the besieged southern city of Mariupol.

Energy giant Shell said on Tuesday it would stop buying Russian oil and natural gas and shutter service stations and other operations in the country.

Senior US officials traveled to South America over the weekend to meet with President Nicolas Maduro’s government, a surprise high-level meeting between the two countries. Officials discussed easing oil sanctions on Venezuela amid the fallout from a potential oil embargo on Russia, according to Reuters.

Get Ukraine updates:We will email you the latest news once a day

Visuals:Mapping and tracing the Russian invasion of Ukraine

Modern War Weapon:A look at the weapons used in Ukraine

The United Nations Human Rights Office has recorded 1,335 civilian casualties across Ukraine since the war began, including 474 dead and 861 wounded. Among the dead were more than twenty children. The UN said the true number is likely to be “much higher, especially in government-controlled territories and especially in recent days, where the receipt of information from some locations where intense hostilities have been ongoing” has been delayed and many reports await confirmation.

The UN refugee agency said on Tuesday that 2,011,000 Ukrainians have fled the country, most of them to Poland. Josep Borrell, the EU’s foreign affairs coordinator, said the EU could take in up to 5 million Ukrainian refugees if Russia continues to attack cities.

Top US spy: Putin is “grieved” by the West, but is looking for a distant path in Ukraine

The top US intelligence officer offered a blunt assessment Tuesday of Russian President Vladimir Putin’s misstep and the potential for conflict escalation amid the invasion of Ukraine. U.S. intelligence agencies found that Putin miscalculated by engaging in the conflict that the United States and Europe were too internally divided to provide a clear response, that Ukraine was a weak and ready-to-intervene country and that Russian forces had modernized themselves enough to quickly win a battle. Director of National Intelligence Avril Haines before the House Intelligence Committee.

“Putin feels aggrieved that the West does not give him proper respect and sees this as a war he cannot lose,” Haines said.

She said Putin’s “rattle of nuclear swords” was part of a strategy to project power in an effort to create a face-saving retrograde regime. CIA Director Bill Burns said during congressional testimony that Putin “has no sustainable political end in the face of what will remain fierce resistance from the Ukrainians.”

Biden: The oil embargo affects the “main artery of the Russian economy”

President Joe Biden announced a ban on US imports of all Russian energy in an effort to target “the main artery of the Russian economy.”

“Russian oil will no longer be accepted in American ports,” the president said at the White House. We will not be part of Putin’s war support.”

Biden acknowledged that gas prices, which have already risen since Russia’s invasion of Ukraine, will rise even more. The president said he made the decision in consultation with European allies, but added that they were not in a position to join the United States in banning Russian energy imports.

While the United States imports little oil and gas from Russia, Putin supplies Europe with 30% of its oil and 40% of its natural gas. European leaders have been reluctant to cut off Russia’s energy supply line. Biden said the United States was working closely with European allies to develop a “long-term strategy” to reduce their dependence on Russian energy.

In Mariupol, a struggle for survival

The Ukrainian government said the Russian military had violated agreements on the humanitarian corridor for the fourth consecutive day in Mariupol, making evacuation “impossible”. The bombing continued nonstop for a week, and most facilities are down. Civilians in the besieged southeastern port city are struggling to survive, and the Associated Press reports that bodies have been left uncollected in the streets.

Efforts to establish evacuation routes have repeatedly collapsed. With the water supply cut off, people were dependent on streams or thaws. The power outages have left residents relying on car radios for information, some being broadcast from areas controlled by Russia or Russian-backed separatist forces.

Looting of food, clothing, and even furniture is widespread, and locals refer to the practice as getting a “discount,” the AP reports.

An 11-year-old boy made a file A heroic journey to Slovakia alone to escape Russian attacks. According to Facebook By mail from the Slovak Embassy in the UK, the boy crossed the Slovak border with a plastic bag, a passport and a phone number written on his hand. Volunteers took him for food, warmth and drinks as they prepared for his next trip. Officials were able to call his mother from the phone number written on his hand. In a video posted to Facebook, she thanked everyone for the safety of her son.

“He conquered everyone with his smile, fear and determination as a true hero,” said a representative of the Slovak Interior Ministry.

The number of refugees fleeing Ukraine reached 2 million on Tuesday, according to the United Nations, the fastest mass exodus seen in Europe since World War II.

Poland has been the escape point for more than 1.2 million refugees. Hundreds of thousands fled to other European countries, including about 100,000 to Russia. More than 15% of the country’s 45 million people are of Russian descent. 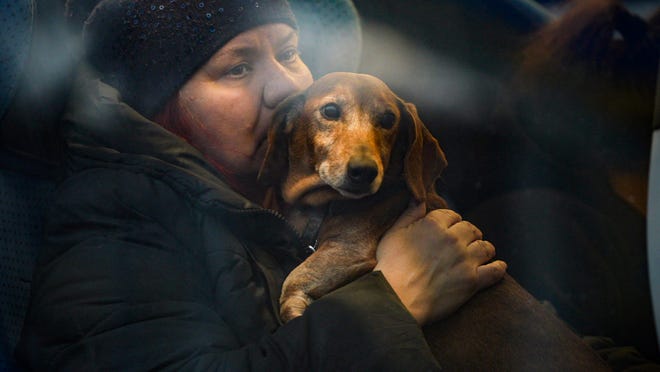 Russia warns that oil prices may reach $ 300 a barrel

Russia has warned that the price of oil may jump to $ 300 a barrel and He threatened a possible shutdown of gas supplies to Europe amid rising tensions against Western countries considering an embargo on Russian oil.

“It is absolutely clear that refusing Russian oil will have dire consequences for the global market,” he added. Russian Deputy Prime Minister Alexander Novak He said in a statement broadcast on state television, according to Reuters. “The rise in prices will be unexpected. It will be $300 a barrel, if not more.”

Novak referred to Germany’s decision last month to freeze certification of the Nord Stream 2 . gas pipeline It could stop the current Nord Stream 1 pipeline It is considered one of the most important natural gas sources in Europe.

“We have every right to make a corresponding decision and impose a ban on pumping gas through the Nord Stream 1 gas pipeline,” Novak said.

Gas prices are now the most expensive in US history

After days of skyrocketing gas prices in the wake of the Russian invasion of Ukraine, the national average gallon of gas is now The highest number in US history, breaking the record that has been in place for nearly 14 years. As of Tuesday morning, regular gas in the United States costs $4.17, according to AAA, up from $4.06 on Monday. Last week, the average cost was $3.60.

“Americans have never seen gasoline prices so high, and we’ve never seen the pace of increases so fast and furious,” Patrick de Haan, head of petroleum analysis at fuel-saving app GasBuddy, said in a statement Monday.

Many refugees cross into Poland through the westernmost city of Lviv. But the city is crumbling under the pressure of tens of thousands of people who have fled their towns in the hope of seeking refuge in another country. “We really need support,” said Mayor Andrei Sadovyi. He said the city needed big tents with kitchens to prepare food.

Once a popular tourist destination, the historic city had a population of 700,000 before the war. Now, more than 200 thousand displaced Ukrainians fill Lviv sports halls, schools, church buildings, hospitals.