The situation is dangerous for German gas supplies: On Wednesday (13.07.2022), the Russian company Gazprom announced that it is not certain that Russian gas supplies to Germany will continue after the completion of maintenance work on the Nord Stream pipeline. , which runs through the Baltic Sea. Maintenance work will be done till July 21.

Gazprom officially justified the announcement that a major turbine in Canada that had recently undergone maintenance had not yet returned to concern. The German government, for its part, says it will have no reason to cut gas supplies because it will supply the turbine from Canada. Recently, Russian gas has been delivered at only 40 percent of its normal level.

Russian gas is very important for Germany’s energy supply, especially for industry and private households. About half of the homes in Germany are heated with gas.

In other words, Russian President Putin is using Germany’s gas supply as a political weapon. At least that’s what Federal Economy Minister Robert Habeck and Chancellor Olaf Scholz have repeatedly indicated. Habeck told RTL television: “I’d be lying if I said I wasn’t scared of this situation.” Germany’s dependence on Russian gas remains high, although the government has already taken various measures to reduce it.

The Federal Network Agency, a state authority, is responsible for deciding who and how much gas is received in Germany. Its head, environmental politician Klaus Müller, always points out that private households get gas first. He told Redaktionsnetzwerk Deutschland: “German and European laws provide for the protection of private families until the last moment.” Even Economy Minister Robert Habeck isn’t sure it’s possible. Habek has questioned whether private consumers are given priority over customers in the industrial area so far if gas supply is cut off.

It’s clear that nerves are stretched to the limit – according to opinion polls, support for sanctions against Russia is also on the wane. Klaus Müller, the head of the Federal Networking Agency, said that private individuals in Germany must prepare for gas costs that will now triple, next year: “For those who now receive their heating bills, the costs will already double. The effects of the war in Ukraine have not yet been taken into account. So far around 1,500 euros per year for gas Paying customers should expect bills for 4,500 euros in the future.

Habeck’s idea of ​​not putting private consumers at the forefront of gas supply disruptions has been viewed critically, particularly by social organisations. Verena Bentele, head of Germany’s largest social union, VDK, told the media group “Funke” that families with young children, the disabled and the elderly, the chronically ill and those in need of care are particularly safe. Gas supply. According to Eugen Breisch, CEO of the German Patient Protection Foundation, a minister like Habeck is not in a position to decide who gets gas and in what quantities. “The Bundestag has to make the final decision on the issue of priority,” Braisch told Osnabrücker in an interview with Zeitung.

Gas reserves in Germany are limited. And the price is very high. By law, reserves in Germany must be 80% by October 1st and 90% by November 1st. This year, there is much less going on. Currently, the stock is at 65% – not enough to ensure winter supply. In fact, the Bundestag will again decide who gets the gas based on priority.

Meanwhile, the European Commission in Brussels expects Russia to completely stop supplying gas to Europe again this year. There is a draft emergency plan, which provides for public and commercial establishments, for example, to be heated to a maximum of 19 degrees Celsius starting in autumn. Autumn and winter are sure to be tough for gas-dependent customers in Europe. 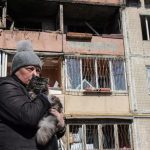